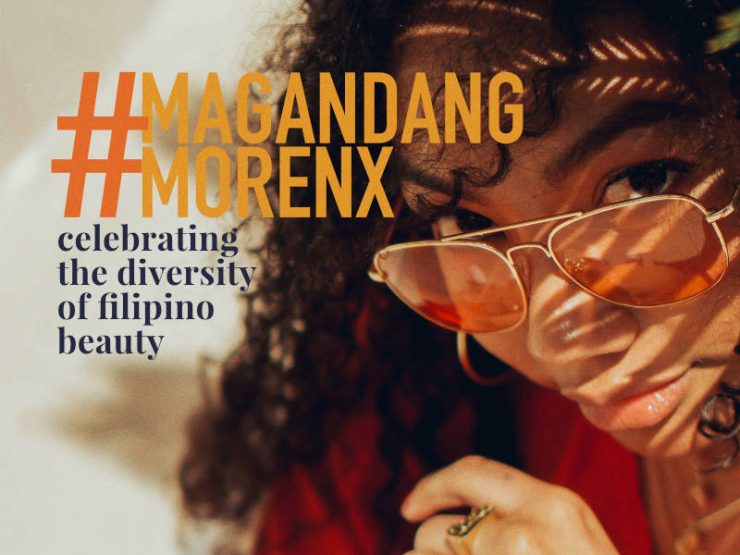 “I’m just now seeing conversations about colorism within Asian communities. Colorism is still so prevalent because no one used to want to talk about it. Colorism is like that dark family secret that you only learn about once you get older because your family members were too ashamed to talk about it. 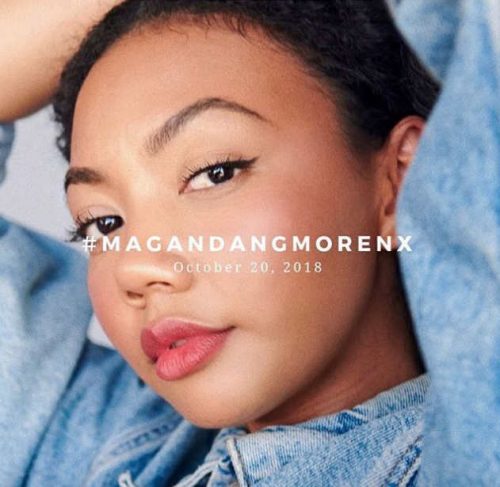 My interview with Asia Jackson was supposed simply to feature, promote, and learn a bit more about the movement she started, #MagandangMorenx, which means “beautiful brown skin”. It is a campaign aimed at challenging the traditionally enforced beauty standards within mainstream media — but the calendars have aligned, since the next #MagandangMorenx Day is happening this month, October 20, 2018, in celebration of Filipino-American Heritage Month!

In the sea of hashtags these days, you’ll find this LA-based actress and digital creative using her platform to spark dialogues on colorism and being the voice of honesty and wit. When she’s not on screen, she’s an activist who encourages a positive self-image, self-love, and self-worth. Asia opens up with us about the #MagandangMorenx movement, today’s industry standards, and her personal struggles, experiences of colorism, and how she has since learned to use them as strengths.

Here’s why she’s outspoken about #MagandangMorenx…

I have respect for you on sparking this whole hashtag online and not diluting your platform for pure commercialism as other influencers do. How did this all start?

In October 2016, I was thinking of ways to celebrate Filipino-American History Month. I started thinking about my experiences while living in the Philippines as a child and I remembered how differently I was treated for having dark skin. I remembered how differently others were treated for having dark skin as well. I realized that colorism was such a huge part of the culture, and saw no mainstream conversations being had about it. So #MagandangMorenx was born.

I’m glad you did. I have admirations for fellow brown-skinned ladies who confidently feel beautiful with their features. Movements like this empower many people—just like me for example.

One of the reasons why I created the hashtag was to celebrate the diversity of Filipino beauty, which is rarely celebrated in mainstream Filipino media. When I lived in the Philippines, every celebrity, every model on every billboard, was light skinned. The truth is, there are Filipinos who are my color, or even darker. There are Filipinos who look exactly the way I do, with my skin color and hair texture. It’s important to me that all Filipinos see themselves represented, to not feel alone.

I grew up in the Philippines and I agree with all you just said. It’s a shame there’s that divide. How was the online reception when you started your movement, by the way?

You’re a celebrity, model, influencer. Part of your job is your looks. Was it hard for you to book gigs? How’s the industry doing in this matter?

As an actor in Hollywood, I’m actually favored as the ‘token black girl’ because I’m considered light-skinned here and in black communities. I still experience racism, but I’m seen as more palatable to mainstream audiences in the U.S. because I’m a ‘light-skinned black girl’. If anything, I experience the negative repercussions of racism, but I don’t really experience the negative repercussions of colorism, specifically. I actually benefit from colorism in Hollywood, the way that tisays (Filipino/Tagalog term for Filipinos with partial European, mainly Spanish, heritage) benefit from colorism in Filipino showbiz.

Oh, so kind of just a reversed situation. But speaking of tisays, there’s a lot of Twitter threads circulating about “eurocentric” looking ladies getting more opportunities. How do we both not invalidate them, yet also put out our voice and representation?

From personal experience, it’s always been a nightmare to be invalidated by my own community, because I don’t fit the standard of what it means to ‘look Filipino’ or ‘look Black’. That being said, Filipinos with eurocentric features are still Filipino. However, we can still call out the culture’s preference for eurocentric features and the culture’s discrimination towards dark skin without invalidating anyone’s identities.

Though it took her awhile to get to this healthy headspace…

How were you able to fight these personal struggles growing up?

As a child, I definitely wished I had lighter skin because all the characters on TV who were considered beautiful & successful had light skin. There were advertisements everywhere telling me that I had to lighten my skin. My classmates bullied me for having dark skin. It took me a really long time to be completely comfortable in my own skin, but what really helped me the most was seeing other girls who looked like me on social media.

Colorism is a much broader social issue than just beauty standards, as it affects people’s quality of life. This prejudice is often perpetuated by negative media representation. And right now, Hollywood is seeing a shift in terms of representation and there is a lot of diversity on TV right now, but growing up it was never like that. By seeing brown girls like me on social media embrace themselves, it inspired me to also embrace myself. And now I’m doing that for other brown girls. It all came full circle.

Hence, this hashtag was born and speaks for us all…

What do you want people to take away here? Your hopes for #MagandangMorenx?

My hope is that #MagandangMorenx will continue to be a catalyst for social commentary about colorism. I got a lot of messages from people in India, Brazil, Thailand, and elsewhere, saying that colorism is rampant in their communities as well. One day I hope that I can expand this conversation to a more global scale, that is inclusive of all cultures that experience colorism.

This Filipina actress wants to change the colonial mentality around beauty.

The next #MagandangMorenx Day is on October 20, 2018 in celebration of Filipino-American Heritage Month! Join the movement and show off your support by posting with the hashtag. Follow Asia Jackson on Twitter,Instagram, YouTube for more updates! 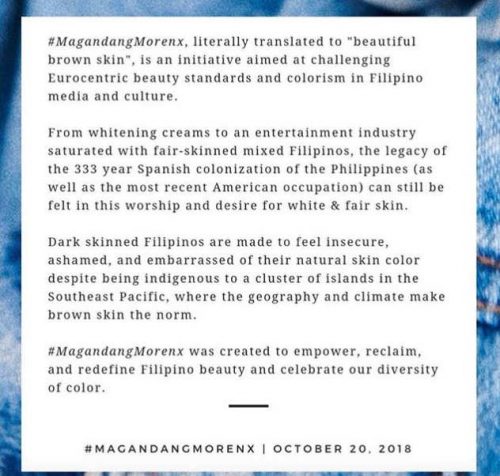