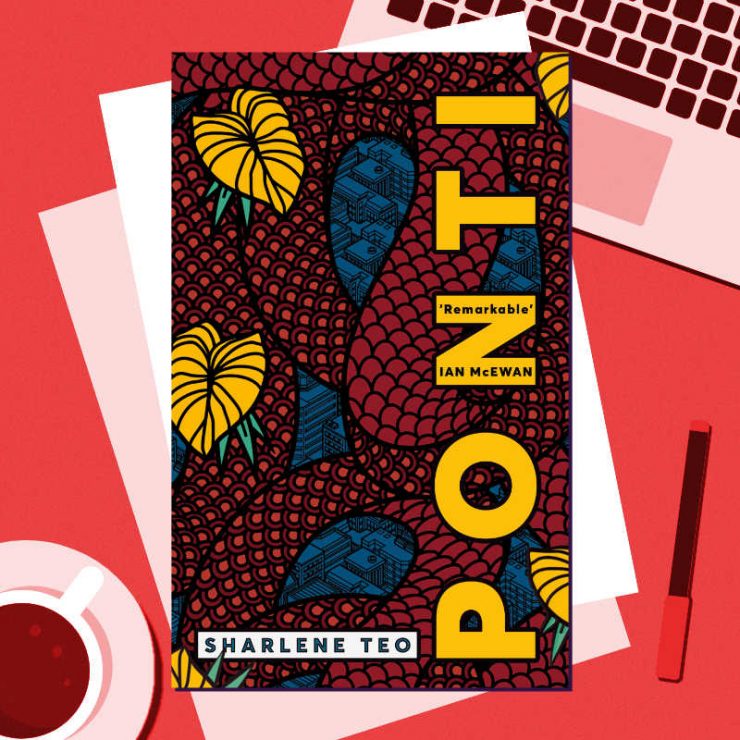 Sharlene Teo talks about her debut novel Ponti: “I wanted to explore the dependencies and disappointments between mothers and daughters and teenaged best friends.”

I immediately assumed that such an overachieving title would probably be too “highbrow literary” for me, someone who is more inclined to fluffy chick lit and graphic novels. However, when a friend practically demanded I read it because, “I would totally, absolutely get it,” I picked it up from the library and devoured it in two sleepless nights. I finished reading it with a heartfelt wish that I could read more local stories like these, which truly nailed down so much of what I felt about growing up as a woman in Singapore.

Ponti is a coming-of-age tale set in 2003. Sixteen-year-old Szu is friendless, fatherless, and alienated from her emotionally inaccessible mother Amisa, a former actress who once portrayed a ‘pontianak’ (female vampire from Malay mythology) in cult seventies horror film series ‘Ponti’. When Szu finally makes friends with a privileged and self-absorbed classmate called Circe, their intense but short-lived friendship leads them to some startling discoveries about themselves and Amisa.

Intrigued? Read on to find out what Sharlene has to say about how her personal experiences and perspectives shaped this evocative novel.

Hi Sharlene! First things first: could you tell us more about how your love for writing started?

Ever since I watched Sesame Street and they sang songs about the alphabet, and the letters were depicted as brightly colored puppet figures that sang and danced! I thought, that’s a medium I love! Since childhood, I loved to write stories and poems.

At what point did you decide that you had to write a novel?

The first novel I attempted to write was a domestic fairy tale about a woman whose husband gets sucked into a small pond and becomes a merman, and she had to dive into some sort of underwater kingdom and retrieve him, even if she didn’t like him very much in the first place. Even as a twelve-year old I was fascinated by marital roles and missing persons, it seems.

The way you depicted girls’ school life in Singapore brought me right back to my teen years. I’ve never read a Singaporean book that was able to nail that stuffy and antsy claustrophobia so well. Could you tell us more about how you tapped your own memories and observations of girls in girls’ school for such evocative setting and portrayals?

“Stuffy and antsy claustrophobia” is a beautiful way to put it! Well, I went to an all girls’ school, though my experience of it was a lot more conventional than Szu and Circe’s. Secondary school in Singapore in the 2000s—it doesn’t take a lot of effort to summon it, that mixture of nostalgia and claustrophobia, anxiety and exhilaration, tiresome routine, and pockets of rebelliousness. Chalet parties and pool halls and the 77th Street trinket shop and the synthetic-buttery smell of popcorn. These sensory and visual impressions are still so clear to me. Terrible fashion trends—remember how overpriced surf wear was the “in-thing”? Who could forget it? I hadn’t read enough Singaporean novels and stories that celebrated this.

More broadly speaking, in what ways do you think the characters in Ponti reflect certain facets of the Singaporean female psyche?

I wanted to write a novel specifically exploring the Singaporean female psyche—so I am very grateful that you seem to have picked up on that! I’ve been asked if I could have transplanted the story somewhere else, but I don’t want to—Singapore as a city, an oppressive or homely environment, and a character in itself—plays such a huge part in the novel. I wanted to consider how formative your environment and upbringing is on who you turn out to be, how much it shapes or stymies one’s innate qualities. Amisa, of course, is from Malaysia—and she moves to Singapore in the 70s and watches the urban landscape evolve, at first at a thrilling rate, and then at a speed that alienates her. She can’t bear to see so much progress when she herself feels frozen in failure. Szu and Circe are born and bred in Singapore, but of course they have very different family circumstances and upbringings, as well as different outlooks toward why they want to connect with people.

The female relationships that you portray in Ponti, e.g. between Szu and Circe, as well as between Szu and Amisa, felt cold and transactional a lot of the times. Do you think this unsaid antagonism between women is common? (Why or why not?)

Unspoken tension exists between all humans, but of course there are variation to its politics depending on gender and power dynamics. I wanted to explore the dependencies and disappointments between mothers and daughters and teenage best friends; adolescence is an especially vulnerable and exposing time, every word could hit a raw nerve.

I felt that you responded with much grace to what I felt was an overly harsh review in The Observer. How do you “psych” yourself when dealing with such feedback?
Well, I think that a novel is a cultural product that creates conversations and I do my best to respect different perspectives and opinions on it; you can’t please everyone, and I wouldn’t set out to do that anyway. I know who my readers are. I have received some incredibly generous, warm, kind, and personal responses—that’s what makes it all worthwhile.

What advice would you give to aspiring Asian women writers who are racked with doubts and fear about the stories they hope/want to tell?

You’ve got to keep in mind that what you want to say and that your perspective is entirely unique and valid. There is no such thing as a single story, as Chimamanda Ngozi Adichie says; human lives and cultures comprise so many different perspectives and narrative strands. Tell the stories you want to hear, whilst acknowledging and respecting the space for other experiences, other stories.

Sharlene Teo is one of the authors featured in the upcoming Singapore Writers Festival, from the 2nd to the 11th of November, 2018. She will participate in the following panels: Scents and Sensibility: Bringing a City to Life (10 Nov) and Writing About the New Asian Woman (11 Nov). Ponti is available on Amazon and Books Depository .