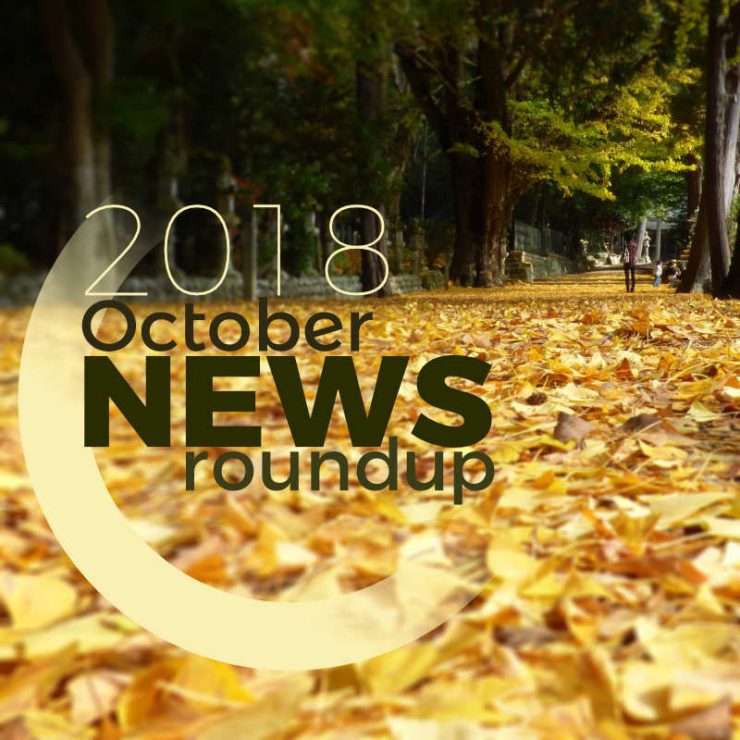 1. #MeToo makes the headlines in India

Almost a year after Tarana Burke’s #MeToo hit Hollywood, the movement has made its way to India, with prominent Bollywood stars breaking the silence on experiences of sexual harassment and assault in the industry. Celebrities such as Priyanka Chopra, Farhan Akhtar, Hansal Mehta, and many others have come out in support of actress Tanushree Dutta who first raised allegations of sexual harassment against actor Nana Patekar back in 2008.

In June, a report by the Thomson Reuters Foundation ranked India the most dangerous country in the world for women, however, despite the barriers and backlash, they have continued to raise their voices. One of them is Indian actress, writer, and director Konkona Sen Sharma who spoke up on the unequal dynamics within the workplace, encouraging survivors to raise their voices. “We all know the reality of the power imbalance that exists in the workplace. Let us encourage these voices instead of shaming them so that others may have the strength to come forward,” she said via Twitter.

With multiple women coming out with their stories on social media, #MeToo has proven its effect in the country as the leading Bollywood production company, Phantom Films, was dissolved earlier this month following allegations of sexual assault made against one of its partners, Vikas Bahl. Soon after author and socialite Suhel Seth was terminated by the Tata Group corporation after allegations of sexual misconduct from six women.

In May this year, Japan’s parliament passed legislation to encourage women candidates to stand for elections, as the country faces high rates of underrepresentation for women in politics with merely 47 women amongst 465 members in the parliament’s lower house. However, despite this being mandatory under the new law, the country continues to lag disappointingly.

This month, Japan’s prime minister Shinzo Abe appointed only one woman to his new cabinet, raising questions about his commitment to “making women shine” in the business and political sectors. The minister appointed was Satsuki Katayama, who he claimed had “the presence of two or three women.” The prime minister would evoke even more backlash when Ms Katayama was forced to purchase a new dress as her outfits were deemed incompatible with the existing official dress code.

Besides the case of Ms Katayama, other women politicians have also been faced with actions reflective of the gender inequality in Japan. Yuka Ogata, a local politician, was forced to leave the Kumamoto Municipal Assembly for sucking on a cough drop during a session.

3. Happy ending for same-sex couple from “The Bachelor: Vietnam”

Last month, “The Bachelor: Vietnam” took the Internet by storm, when a clip of contestant Minh Thu confessing her love for another contestant, Truc Nhu was released. “I went into this competition to find love, and I’ve found that love for myself, but it isn’t with you. It’s with someone else,” Ms Thu confessed to leading man Nguyen Quoc Trung. Although Ms Nhu remained on the show following the confession, the two are now in a relationship following her elimination.

Despite receiving support from fans worldwide, the two contestants said they had never been in a same-sex relationship before, so coming out on a television show was extremely difficult. Both of them were worried about the response from their families. “My older sister was worried if I could ever find a husband and would be able to find happiness,” said Nhu. She told her older sister, “If I’m happy in this relationship then you need to support me and not scold me. Going the traditional way and having a husband and child doesn’t necessarily mean that you will find happiness.'”

The 76-episode series Mother’s Life was released last month on major television channels across China, and has become popular amongst middle-aged and elderly viewers. However, this has not been the case for the younger generation, who have criticised patriarchal themes within the show, stating it perpetuates conservative values, encouraging the need for women to obey their husbands.

Besides the portrayal of “feudal female virtues,” the protagonist’s obsession with giving birth to a son for her husband also sparked much backlash. One user on Douban, China’s leading film and television review platform, said, “the episode of Mother’s Life broadcasted today let me know clearly that gender discrimination has been long-standing and serious…it’s disgusting.” So far, the drama received a rating of 2.7 out of 10 from over 16,000 users.

This month, the Seoul Metropolitan Government celebrates the launch of a pilot program providing free sanitary products to women in the capital city. The dispensaries will be placed at ten public facilities as a solution to “period poverty,” an issue proven to be particularly harsh for younger women. The program was implemented as part of Seoul’s newly revised Gender Equality Basic Ordinance, and the lobbying of multiple women’s rights groups.

Earlier last year, the topic of “period poverty” sparked a national conversation when shocking discoveries were made of teenage girls creating their own sanitary pads by wrapping tissues around the insoles of shoes. Following this, many female students became outspoken about the unaffordable price of sanitary products in the country, breaking a long-standing stigma of menstruation.

Globally-acclaimed institution Harvard faces a lawsuit challenging its admissions process as discriminatory toward Asian Americans, who currently make up a fifth of their student population.

During his testimony at trial dean of admissions William Fitzsimmons confirmed that although admissions officers gave Asian applicants higher ratings than white applicants in the academic and extracurricular categories, the admissions rates for Asians were pulled down because of their lower personal ratings—despite having alumni-interview scores comparable to or higher than those of white applicants.

However, while testimonies point to racial discrimination as a fact in this lawsuit, a group of Harvard students also took the stand in a Boston courthouse this month to voice their views on the matter, arguing that the Harvard application process allowed them to take pride in their heritage. Among them was Harvard senior Thang Q. Diep, who said, “It [allowed] my immigration history to be taken into account, my own experiences taken into account.”

7. Should we celebrate international #DayOfTheGirl?

Thursday October 11 marked international Day of the Girl Child this year, themed “With Her: A Skilled Girl Force.” The goal was to symbolize a generation of girls preparing to enter a world of work transformed by technological developments, innovation, and automation. However, while messages across the world pronounced that “girls can do anything” and are in charge of their own futures, we must also remember the harsh realities of how the lives of girls and women continue to be limited on a daily basis.

Feminist writer and public speaker Mona Eltahawy wrote an insightful piece earlier this year speaking of this dangerous notion. “What is particularly cruel is that, especially in the West, society increasingly feeds girls ‘you can do anything’ lies, while the patriarchy remains intact. They can’t. And they have to know why,” she said. Ms Eltahawy reminds us that dismantling the patriarchy intersects with factors of misogyny, racism, colonialism, and war, and she urges girls to rage. “I am an angry woman. And angry women are free women.”

Founded in 2009, the popular video streaming service DramaFever has come to an end and was shut down this month. The website was acquired by Warner Bros in 2016 from Japan’s SoftBank Group, offering on-demand streaming video of Asian documentaries, movies, and TV shows with subtitles.

In a statement released mid-October, the company said, “Today, Warner Bros Digital Networks will be closing its DramaFever OTT service due to business reasons and in light of the rapidly changing marketplace for K-drama content, a staple of the service’s programming.” The website further issued thanks to its supporters over the past nine years that it has been running.