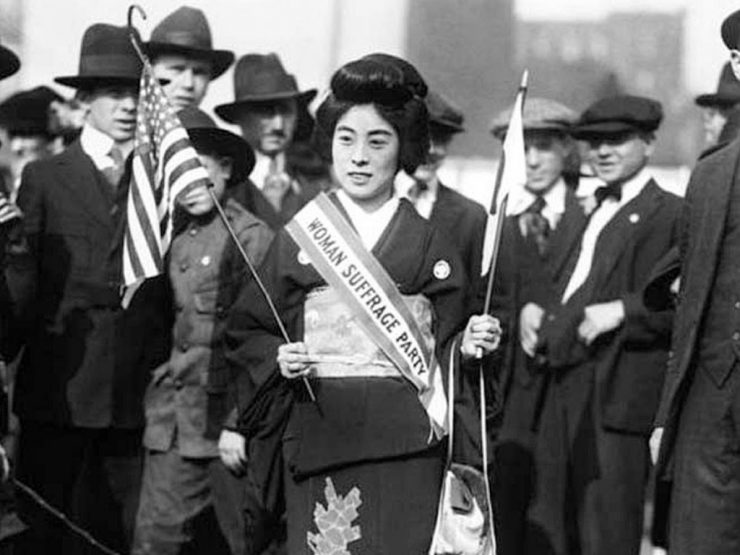 About sixty years before Ulrich penned her words, on October 23, 1915, women marched en masse in New York City, hoping to sway the vote on the state referendum that would finally give them the right to vote. This parade—what we would call a march today—was considered the most successful of all suffrage parades to date; however, it was not enough to influence the vote. Over a week later, the referendum did not pass.

Although the disappointment was bitter, it was not permanent. Two years later, suffragists flooded the streets of New York again and joining them from the other hemisphere was a petite yet powerful dancer, actress, writer, and magazine editor from Japan: Komako Kimura. Not a Japanese American woman, but a Japanese woman, came all the way across the Pacific Ocean for a march. Who was she?

Like many contemporary American celebrities, Kimura had a storied past and became famous for her antics. By the standards and norms of her culture and times, Kimura would probably not have been considered “well-behaved.” When she was only 14 years old her parents set up an arranged marriage for her. Common for this tradition, neither she nor her groom-to-be had met before. Courageous and ahead of her time, she escaped from the marriage carriage and eventually went to another city and became a dancer, a rather scandalous occupation at the time. She also became an actress who found fame—or infamy—for her choice of roles. When confronted and challenged on this, she made a bold move and opened her theater performances, free of charge, to the public. What authorities prohibited, she made accessible—she would not be censored. Kimura was arrested and tried, but her cunning and intelligent mind saved her. Her verbal defenses were brilliant.

The word “suffrage” did not yet exist in her native Japanese vocabulary, but, as a visionary decades ahead of her time, Kimura was moved by the plight of her American sisters. For Kimura, a co-founder of “The Real New Women’s Association” (Shin Shinfujinkai) and ever the fighter for women’s rights movement, the issue was not foreign. She traveled to New York in 1917 to study English, to learn the strategies of American suffragists, and to raise funds for the Japanese women’s own suffrage efforts. And also to participate in a suffrage march, of course. Komako Kimura lent both her celebrity and support to the cause of New York women.

Past failures buttressed future attempts, and this time, on November 6, 1917, the state referendum passed, and New York became the fourteenth state where women won the right to vote. The fight, however, was far from over.

The suffrage movement peaked in the early 1920s in Japan, soon after Kimura’s travel. Japanese women, however, only won universal voting rights in 1945. In the USA the Nineteenth Amendment to the Constitution was adopted in 1920, prohibiting states and the federal government from denying the right to vote on the basis of sex. Nonetheless, voting did not immediately become a right for all American women. Individual states voted to ratify the Amendment from 1919 all the way to 1984. And, for Asian-Americans in particular, the process was drawn out. Chinese-Americans were the first to win the right to vote in 1943. Nine years later all Asian-Americans won the right, and the 1965 Voting Rights Act was of prime significance, as Section 2 prohibits voting discrimination based on race or identification with language minority groups.

Today, it is often very easy to take our voting rights for granted, especially when more than a century removes us from the bold steps that our ancestors literally took. Now we talk about how to increase voter turnout, especially among young people.

This week, the United States will hold her midterm elections. In this political climate of heated debates and increasing divisions, voting is of paramount importance. In the light of our ancestors, like Kimura, who fought bravely for this right, this privilege is even more prized.

While not much is known about Kimura, or at least not readily accessible for archival research, her bravery continues to shine a light and is still relevant, even more than a century after she joined the march and movement.

Here is a woman who volunteered to be front and center stage, both as an actress and as an activist. While she was not considered “well-behaved” in her culture and times, she certainly marked her name in history. The sacrifice of a comfortable and secure life in exchange for adventure and travel led her to find her voice and our votes. It’s a constant reminder that, like ourselves, our issue is not an island but resonates with our sisters in faraway lands. We have strong-spirited women all over the world who are ready to support us, and our progress—and our political choice will have an impact beyond us as well.