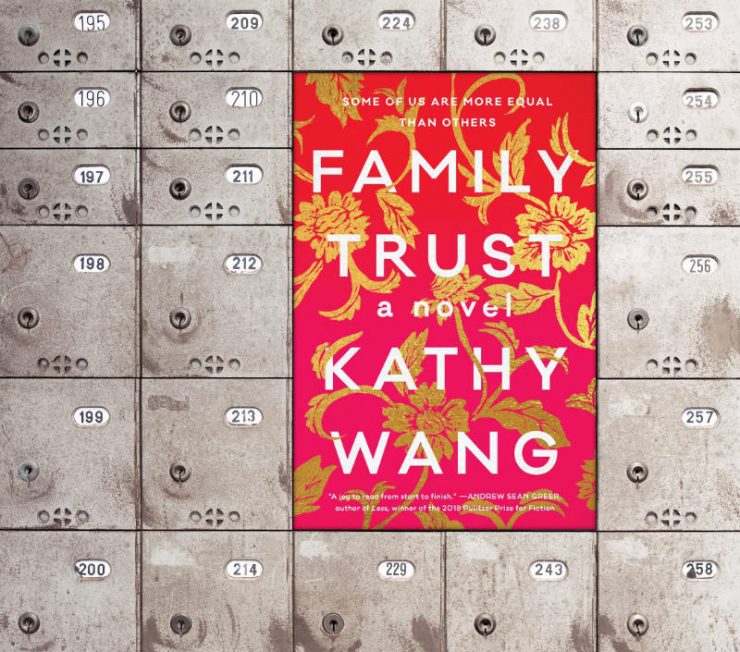 “Children always punished you for being petty, all while conveniently forgetting you had washed their stained sheets and underwear for the first eighteen years of their lives.” —Family Trust by Kathy Wang

This was the first of many delightfully perceptive insights into human behavior that made me pause while reading Kathy Wang’s debut novel, Family Trust. Along with its piercing depictions of a rich modern-day Chinese-American immigrant family, the book is packed with drama so fast-paced and so (annoyingly) real that I could not put it down.

Stanley Huang, the patriarch of this crazy rich Asian family in Silicon Valley, is diagnosed with cancer. Thus begins the classic story of a wealthy family’s battle over inheritance, as everyone secretly tries to find out: “Who’s getting what?” It does not help that no one knows how much Stanley actually has left, save vague, occasional allusions to the several millions he’s made.

Meanwhile, everyone in the family is grappling with other issues in their lives. Stanley’s son Fred is a middle manager at a second-tier venture capital firm whose mistakes in life constantly betray his meticulously calculated vision of rising to the top of “the caste system that [rules] his world.” He has a Harvard Business School degree but not the credentials that he believes befit an HBS grad. He is also trying to fight back against being pigeonholed as just another Asian male in finance. All of this fuels a stubborn insecurity that has him tirelessly aggrandizing his worth both professionally and romantically. So when he finds a career opportunity that is sure to fast-track him to the top, he goes at it with full force.

Kate, Stanley’s daughter, is a successful product management director at a prestigious Silicon Valley tech company. She has done a flawless job of getting to where she is now, deftly climbing the corporate ladder, all while raising two kids and supporting her husband’s startup endeavor. That is, until she is prompted to ask, how has being the nice, “thankless base for his endeavors” served her?

Stanley’s first wife Linda lives to the peaceful rhythm of retirement, reaping the fruits of having been a financially astute matriarch. She helps take care of the grandkids, attends get-togethers with fellow affluent Taiwanese-American immigrants, and even ventures into the online dating world after a decade-long hiatus from romance. With the news of Stanley’s illness, she makes a point to see to it that her children are bestowed their fair share of Stanley’s assets. After all, she is in the uniquely advantaged position of knowing Stanley’s ways thanks to their 34-year shared history.

Mary Zhu, Stanley’s second wife who is almost three decades his junior, dutifully takes care of her dying husband but also cannot resist the allure of the forbidden fruit: “What would life be like with Stanley gone and his money still here? The idea was so intoxicating, so attractive, that she knew to give it oxygen would be to allow it to grow to dangerous levels.”

Witnessing these characters’ stories unfold was like watching a drama that hits all my guilty pleasures. Kathy Wang develops them in detail, using past anecdotes and intimate explorations into their psyches. As someone who loves witty commentary on the way human beings can be, I repeatedly found myself underlining and snapping passages to share with friends.

At the same time, it was this very character development that made the book fall a little short of my expectations. It felt as if only the crassest and anxiety-ridden dimensions of the characters were emphasized, perhaps to keep the story engaging. In the end, I felt that all I had gotten were tropes, or clichéd versions of the characters, instead of their fully-fledged human selves.

Thus why I found the following passage ironic: “How many dissatisfied Harvard Business School graduates with excellent finance backgrounds existed out there? … Even narrowing it down to merely the Asians…didn’t provide particular comfort. Dissatisfied, highly educated Asian men in Fred’s age group had become almost a sort of cliché.” Fred himself is painted as no more than this cliché. In fact, he’s painted as the worst of them, with all of his actions dictated solely by its expected returns of more money, power, and sex.

To be fair, I do think that my expectations of the book heightened as the book progressed. At the beginning, I was pleasantly surprised by the descriptions of the pressures plaguing today’s ambitious Silicon Valley professional. More importantly, the book was doing such a good job of giving vocabulary to the common experience that a lot of East Asians in America are having right now, that I was rooting for greatness. “The woman likely didn’t even think she spoke English, regarding her as just another sexless Asian dotting her periphery, someone who could be ignored at will, like a houseplant.”

Family Trust fits right into the surge in Asian-American representation happening in books and movies today. When Crazy Rich Asians came out, I worried that the movie might promote one-dimensional stereotypes about East Asians in the blind pursuit of increased representation and comic relief. Ultimately, I found solace in the realization that representation has to start somewhere. The same can be said of my reservations and hopes for Family Trust.

So while you may find yourself groaning at some of the overplayed stereotypes (as I did), and although you may not grow to love any of the characters, there is a high chance that you will enjoy this page-turner. As an added perk, the book is discreetly feminist, with the women quietly but surely prevailing as the strong ones in the end.

(Written by Sophie Choi. Sophie is a book lover based in Seoul. Until recently, she worked in management consulting. Currently she helps manage the volunteer engagement platform Seoul Cares. She enjoys staying active and encountering new people and ideas.)