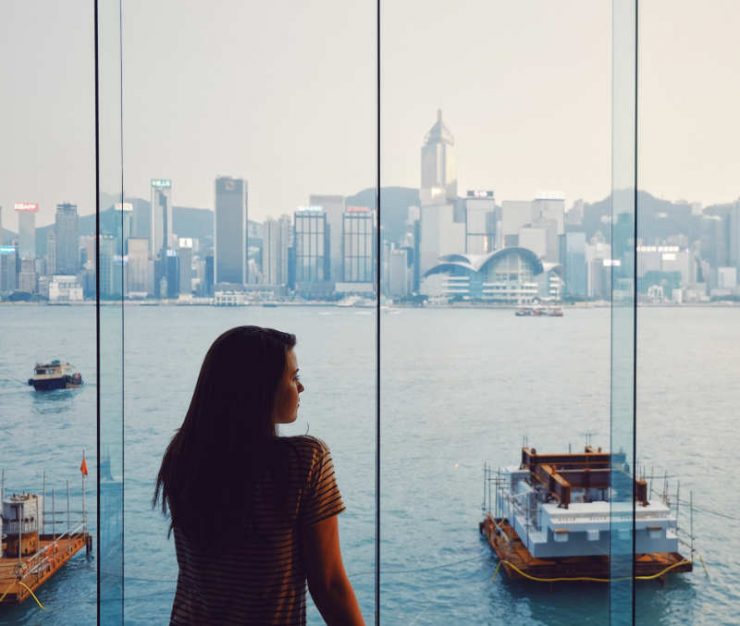 It has been two months since I arrived in Hong Kong without a plan.

I came because the flight was cheap, just $160 USD one-way from Seoul. Well, not just that, of course. I have wanted to work abroad throughout my career in Korea. As a woman who had experienced life in Japan and the USA, I wanted to learn about business in other countries as well, to grow my competence and lead an independent life away from my family. However, my applications for companies in foreign countries never got any responses.

Was it because I was physically in Korea? Did I have to move abroad? Was I courageous enough to live alone in a foreign country seeking a job? At some point, I realized that I did not need to debate it anymore. I chose Hong Kong as it seemed to have many Korean-speaking jobs. Again, not just that. For Koreans, maybe all Asians of my generation, Hong Kong seemed like a New York of our own while we were growing up. Skyscrapers filled with professionals from all over the world, film stars glowing as brightly as any in Hollywood, not tied to a country but proudly beaming a cosmopolitan vibe with everyone speaking English. It was our place to believe that “if you can make it there, you can make it anywhere.”

It did not take long before I discovered my decision was quite reckless. As a foreigner who cannot speak Mandarin or Cantonese, without even a work visa, it’s never easy to get a job in Hong Kong. The majority of job postings were in finance, and most jobs outside that field wanted fresh graduates. I already had a career of more than eight years, but mostly in journalism. Some people recommended I start working whether I liked a job or not, others said I should find a job I really wanted even if it took a long time. I was confused.

There seem to be many foreign job seekers in Hong Kong having difficulties with the local language. More than half of 150 non-Chinese employees surveyed by the Junior Chamber International (Harbour) said they encountered difficulties applying for work largely because of language issues according to South China Morning Post.

Even for local people who have no language barriers, it is still a competitive environment to survive in. According to a 2017 survey by Randstad, a global human resources company, 56 percent of respondents in Hong Kong would be willing to leave the city for a career opportunity, which was higher than the global average of 50 percent. “There are many reasons Hongkongers move away, the major ones being the falling quality of life here and unaffordable housing costs. Young people, especially, are finding it hard to keep up,” wrote Paul Yip, a professor at the University of Hong Kong.

Nobody chants “Welcome to Hong Kong” as Taylor Swift does for New York. Was I to be blamed for dreaming a life in Hong Kong? What were the situations of other foreign job seekers like then? Searching in groups of expats on Facebook and joining job hunt meet-ups, I met some foreigners from other Asian countries. Each of them had different reasons for searching jobs in Hong Kong.

I met many expats living in Hong Kong following their beloved. Sky, a Thai woman in her 20s, is one of them. She studied at The University of Hong Kong where she met her boyfriend two years ago and arrived in Hong Kong this past May to live with him, and has been looking for a job ever since. Though she majored in English and worked as an office administrator in a small law firm of Thailand, she found it hard to apply her career to a job in Hong Kong. Following her boyfriend’s recommendation, she is studying Cantonese and web design while searching for jobs.

The rent is the biggest challenge for her in Hong Kong. She and her boyfriend share a small bedroom for a monthly price of $1280 USD. Sky sometimes thinks that she could live more affluently with this money in Thailand. Also, she feels that local people in Hong Kong are unkind to her now, whereas she thought they were nicer and more relaxed a few years ago.

However, she has her own reason for staying in Hong Kong: “I have memories of love in Hong Kong. I missed the ferry port in Tsim Sha Tsui, the narrow streets in Sheung Wan, the mixed atmosphere of tradition and modernity, and the rooftop of the IFC. In Thailand, these used to be my ‘memories’ I had to look back on. Now, it is a reality, it is where I live. and I want to keep it as my real life.”

Angie, a woman from the Philippines in her 20s, arrived in Hong Kong this past July. Her reason for the move was simple: “I wanted to develop my career in a place that promotes equality opportunities with less gender discrimination”.

She formerly worked in a small company in the Philippines, only to find a glass ceiling for women. While studying in Hong Kong four years ago, Angie completed an internship in a fashion retail company and was attracted by the work culture of Hong Kong. She recalls the many female bosses who achieved great work results and salaries commensurate to their performance, not seniority. She is confident she will find a job soon with her fluency in Mandarin.

The most attractive thing in Hong Kong for her is the ‘busy life’ of local people. “Hongkongers have almost no gaps in their daily schedules. They think about what to do next even while working on the current task. They walk fast, and even escalators in MTR stations move fast. This city makes me try hard and move quickly for my career goal.”

Yosuke, a Japanese man in his 30s, arrived in Hong Kong one month ago after working in mainland China, Taiwan and Australia. He chose Hong Kong as the last opportunity of his working holiday program to learn Chinese culture from various angles. His former work experience showed him the rapid growth of China and he wanted to find a job in Hong Kong to tap the huge market of mainland China.

“As Hong Kong is very open to expats, I thought it would be convenient to live in Hong Kong and there would be many jobs for foreigners. Also, the city is so charming, with a great mixture of diverse races, culture, and geography. Central is westernized, while Mongkok and Sai Ying Pun have an old atmosphere, and Sai Kung and Lantau Island have rich nature.” He is quite optimistic to get a job soon as a Japanese language instructor or system engineer programmer.

However, for most expats, it is a big challenge to find a job after arriving in Hong Kong. “To get a work visa, a foreigner must prove that he or she has special skills that local people do not. The most stable way to get a job in Hong Kong is working in their home country for several years before transferring to a Hong Kong branch,” advises Cathy Wu, a headhunter working in Hong Kong.

Despite all these difficulties, expats seeking jobs in Hong Kong have their own hopes: unique experiences they cannot have in their home countries, dreams of settling down in this fascinating city, and a passion for being together with their lovers. Because of such expectations, they accept challenges and keep trying.

So do I. I did not have a specific plan to live in Hong Kong at first. However, I have found my own reasons to start a different life in this city while meeting great people and adapting to the new environment. The more I know how hard it is to be independent in Hong Kong, the more I become braver than I was in Korea. Yes, it is far better to experience life abroad, rather than just imagining it. If I can make it in Hong Kong, maybe I can make it everywhere.

Jihyun is a journalist and broadcaster based in Hong Kong and Seoul. She is interested in human rights, labor and gender issues, and loves learning languages.