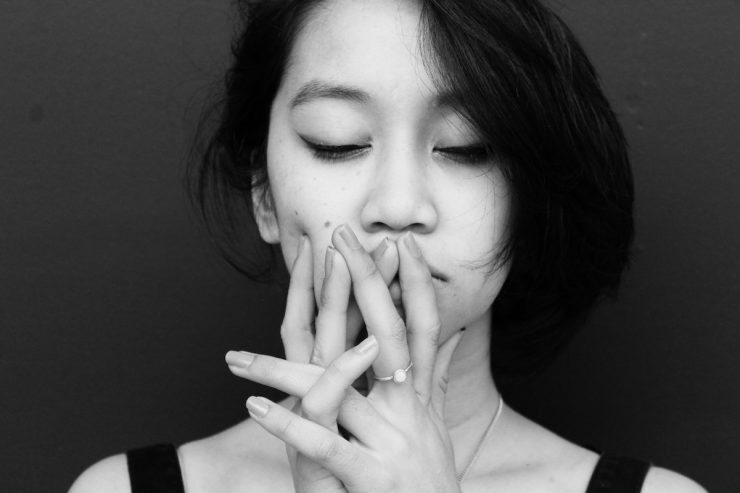 Kavi’s father used to say, “Can’t I beat my daughter?”

Unfortunately, says Kavi, her brother picked up this attitude as well.

She said, “It took me 26 years to walk out of the abusive situation, to realize that I was mistreated. I want others to know that it’s fine to walk away if you are not being treated right and there is nothing to be grateful about if you are being mistreated.”

Kavi, a thirty-something from Singapore, is one of three women in Bangkok, Thailand participating in a performance titled “Bangkok Has Me Now” to raise money for a battered women’s shelter in Chiang Rai.

I wanted to learn more about the stories behind the women performing, so I asked Kavi, as well as two other participating women, about their experiences and thoughts on domestic violence. All three women have chosen to conceal their last names to protect their privacy.

Dariya, also in her thirties, who grew up in Nakon Phanom, said that she saw her friends abused by their boyfriends when she was younger. One of her friends’ boyfriends locked her in a closet for a few hours. In another incident, Dariya heard a couple fighting in a parking lot. The boyfriend was being violent to his girlfriend and the security guard was “trying to talk him out of it.” When the boyfriend didn’t listen, Dariya called the police.

Darya said that she was nervous that the police would not respond because within Thai culture there is a tendency to turn a blind eye to domestic violence and to mind one’s own business. She said, “I was told at various times in my life that when lovers fight, they will sort it out themselves. We are just outsiders.”

Statistics show how common is the problem of intimate partner violence in Thailand.

A 2018 survey of intimate partner violence (IPV) in Thailand carried out by the Thai Women and Men Progressive Movement Foundation surveyed 1608 females from the Bangkok area between the ages of 17 and 40.

42.2 percent of respondents said that they had been forced into sexual acts by their husbands or boyfriends.

41.1 percent said that they were forced to have an abortion.

18.2 percent of women viewed having sex with their husbands or boyfriends as “a duty.”

WMPM also surveyed 1617 men in 2016. 14 percent of these men admitted to using violence when facing a jealous conflict. 42.4 percent said that they forced themselves on their partners when they were angry.

Tanadya, a Bangkok native, shared her thoughts about domestic violence in Thailand. She said, “I feel that men are not sexually satisfied with their partners, so they seek out sex from somewhere else, and if neither their partners or someone else agrees to sex, then they rape them.”

Tanadya went on, “Sex education shouldn’t only be for the school system, we have to raise awareness about sexuality more and more in society in general so that we can increase understanding that this behavior is wrong and unacceptable.”

Tanadya also mentioned negligence by Thai authorities as being a factor allowing sexual violence, such as the Thai police’s response to women being assaulted at the annual Thai water festival of Songkaran, in which the police warned women not to dress “sexy.” Tanadya said that she believed that the government had a responsibility to hold assaulters accountable.

The performers of “Bangkok Has Me Now” will share these statistics and more with the audience, and give an opportunity to discuss possible solutions to issues of intimate violence in Thailand.

Hannah Meltzer, 34, is organizing the “Bangkok Has Me Now” event to feel casual and intimate, as opposed to a formal performance.

In discussing what motivated her to organize the performance, Meltzer, who is originally from the UK, said that after a successful performance of “The Vagina Monologues” in March on International Women’s Day she, “wanted to keep our [women’s] voice out there and sustain people’s attention throughout the year, not just in March.”

Meltzer said that the name “Bangkok Has Me Now” was originally a nod towards “The Hangover 2,” which was set in Bangkok, however she soon started to think about it at a deeper level: “Doesn’t Bangkok have us all in some way? We live here, not elsewhere. Many of us were born here, many of us chose to live here—many of us do not leave, or we come back.”

The event includes monologues and poems, some pieces are funny stories about dating, and others are serious performances about harassment and abuse. Together they praise the common themes of women’s stories and experiences in Thailand.

Visit “Bangkok Has Me Now” on November 22nd at 7 PM at Checkin 99 in Bangkok.

All proceeds will be donated to the Baan Phak Phing charity, a shelter for abused girls aged 6-18 in Chiang Rai. The money will be used to take the girls on a vacation trip, to buy them new uniforms, and to pay for other services that the shelter provides.

Tara is a Thai-Iranian-American journalist currently living in Bangkok. She has covered women’s rights in the Middle East and Thailand, as well as Middle Eastern religious minority rights, for Borderless News Online and Sisterhood Magazine among many others.