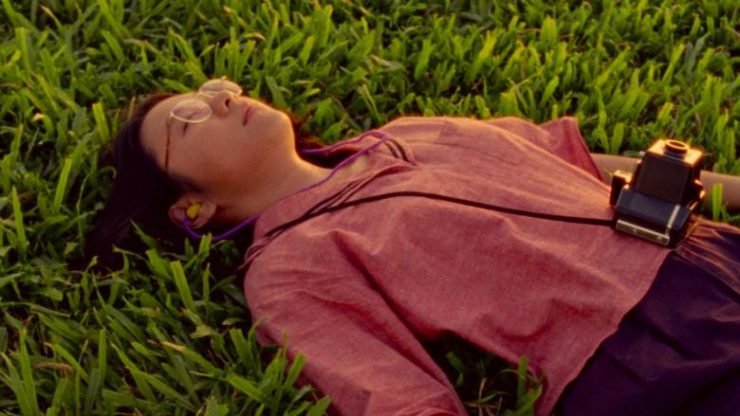 Shirkers is a monumental attempt to reclaim Singapore’s first indie film in a world that lost and kept it.

“When I was 18, the thing I wanted more than anything was to make a movie. I had the idea that you found freedom by building worlds inside your head. But you had to go backwards in order to go forwards. But I never imagined it would end this way.”

In the summer of 1992, Sandi Tan and her friends shot a road movie in the streets of Singapore called Shirkers. She was the screenwriter and also played the heroine, a 16-year-old killer whose obsessive interest in Catcher in the Rye leads her down the path of saving children and killing adults. It was the bored, silly, snobbish rage-fueled type of cinema narrative they’d been deprived of. Her friends Sophie Siddique Harvey and Jasmine Ng were the producer and the editor respectively. And their former film teacher George Cardona was the director.

What was once a passion debut project for this teen-aged girl squad turned into their biggest nightmare. After filming wrapped, Cardona, a man more than twice their age, their director and supposedly mentor, took everything away. He was gone. And so was Shirkers.

25 years later, after a package of Shirkers film reels found its way back to Sandi, Jasmine, and Sophie, they filmed and released a part experimental and part investigative documentary also named Shirkers. It has gone on to become one of the best-ranked movies of 2018 in Singapore.

This present-day documentary is about that production in the past, the making of their film that disappeared. Tan thoroughly excavates what happened. We see a chunk of recovered original footage, we hear the story of how it was lost and found, and we feel for how Tan and her friends reopen old memories on their way to closure and healing. This is to reclaim a narrative of Singapore’s first indie road movie in a world that lost and kept it.

With recovered reels in hand, the movie shot in the summer of 1992 intensely presents a time lapse, a maturation of people and places. Singapore is in every scene, following the tough uncovering in its own documentary, which blurs and connects the lines between past and present.

Tan’s unwrapping of Shirker’s history is sublime, but we also see the unravelling of each person involved in the film, their suppressed emotions bleeding through. The girls’ manic quest for a work of art and passion could easily be looked down upon as just another tale of angsty teens, but Sandi, Jasmine and Sophie’s experience of making and hunting for the Shirkers film is more than just a project. It is an intellectual and emotional game George played on them for years, descending into madness, before returning in the end.

A constant question leaps out through the documentary, “Is Shirkers still about the wandering of Tan and her friends, or is it just telling the story of Cardona’s mystery now?” Why did Cardona take everything away? What did he want to do with the materials? Why did he disappear completely? The constant longing and questioning from Sandi, Jasmine, and Sophie remained unanswered despite the comeback of their film. George Cardona stayed gone. With his passing, he remained unheard.

What gives the documentary its unsettling vibe is that we can tell Cardona’s manipulative energy let Tan operate from the selfish desire of finishing a movie, regardless of her friend’s happiness and safety. Though rooted in noble intentions, railing against an environment where she wants to show off the things that make them different, it was exhausting and draining hearing what the rest of the team had to endure and say against him. It’s infuriating how Cardona’s way of using authority and power to take credit for someone else’s work is still evident in (older) men today treating (young) women in all spaces, and in careers most especially.

And though unintended, the story also becomes a suspenseful thriller with flooding melancholia. In the end, the movie still belongs to the unabashed Sandi Tan, as if S, her film heroine, just had a form of catharsis. And even though her own artistic ambitions put her in a dark place, the closing speech of Tan alone, muttering, “I know I will never get my friends in the same place at the same time ever again. But here they all are.” makes Shirkers a rewarding viewing experience.

Beyond the content, its complex turnout rings with a strange beauty. How something tragic and devastating finally reached its long-delayed forgiveness and redemption. To me, it’s the sigh of relief. For Tan and her friends it’s finally taking back what they truly and originally own.

Shirkers was once a secret history that would haunt and bond them, except that we, as the audience, are in it now as well. This leaves us with the haunting impression that their fear of losing art, youth, identity, dreams and story in a hardening world makes us all similar after all.