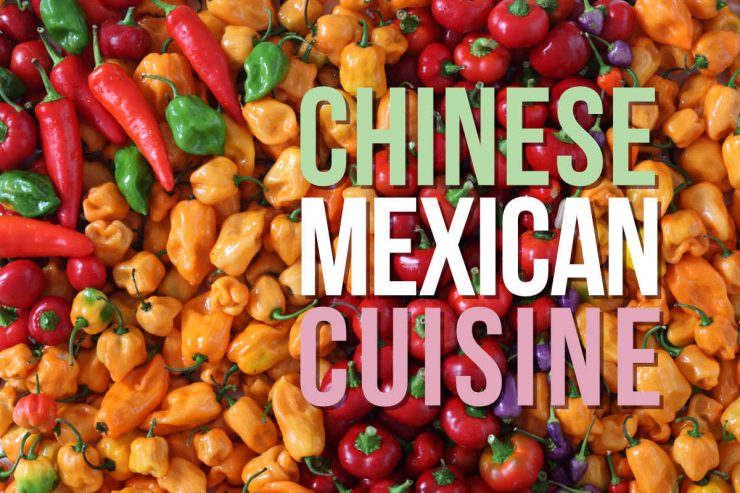 Driving along the winding highways of Mexico City, it’s easy to spot the tacky red pagoda-style roofs and ostentatious oriental decor of Chinese restaurants. It’s a standard that seems to be reproduced every few blocks within any given city. Labeled with homogeneous “Asian” fonts, and adorned with paper lanterns and stylized “Eastern” art, these restaurants are almost always steam table buffets where an all-you-can-eat feast can set you back around 70 to 100 pesos ($3.50 to $5.00 USD).

As I took a seat in the calligraphy-cladded dining hall, my Mexican friend hands over the bilingual menu and observed as I analyzed each item.

“Are you expecting authentic Chinese food?”

Sure looks Chinese. Or so I had thought until I carefully inspected the selection of condiments at the end of our table: sriracha bottles, Mexican hot sauces, dried chilies in oil, jalapeno peppers floating in soy, and a bowl full of cut baby limes.

Being an Australian-born Chinese and having eaten Cantonese food for the majority of my life, my heart sank a little as I watched a plate of deep-fried fat, yellow chilies drenched in soy sauce pass our table.

“I’m not sure if ‘authentic’ is the right word,” I said politely.

My friend orders a carnitas coloradas, or char siu as I have called it everywhere else; arroz frito (fried rice), and a Mexican beer. I followed suit with a glass of horchata.

I wasn’t sure what I expected from a Chinese-Mexican buffet, perhaps something akin to the ‘Americanised’ taste of Chinatowns in New York or San Francisco. But this was almost definitely sweeter and spicier; an inimitable fusion of Mexican ingredients and Chinese-style cooking.

During my stay in Mexico this year, I volunteered at a migrant shelter that provided aid to Central Americans passing through en route to the US. This was in the state called Guanajuato, just 3 hours from Mexico City. On weekends I would travel to different cities, thus I came across this Chinatown near the historic center in Mexico City. Chinatown is Chinatown. But only after tasing the dish I’ve realized this is Mexican as well.

The Chinese arrived in Mexico by the late 19th century, when Mexico opened its borders to foreign immigrants in the hopes of modernising the country. More than 60,000 Chinese settlers arrived at the time, many of whom built railroads, worked on farms and in mines, and contributed to Mexico’s urbanisation, economic growth, and infrastructural development. By 1920 the Chinese had become the second largest immigrant group in Mexico after the Spanish and had spread themselves across the entire country, establishing small restaurants, groceries, and local enterprises in every state.

Many of these Chinese businesses were concentrated in the northern states of Sonora and Baja California, particularly in the border cities of Tijuana and Mexicali which have some of the largest Asian populations in Mexico today. Within the historical center of Mexico City you can still find cafe de chinos—Chinese cafes that serve quick, cheap, Chinese and Mexican foods. These grew in popularity during the early 1900s due to their affordability for laborers and recent immigrants, typically offering two types of menus where you could order familiar tamales and enchiladas for Mexicans, and traditional chop suey and fried rice for the Chinese.

Soon after the beginning of the Mexican Revolution in 1910, the Chinese community experienced widespread resentment and hostility by the native Mexican population as foreigners were blamed for becoming rich at the detriment of lower class Mexicans. The Chinese were accused of stealing employment, corrupting morals with opium and gambling, and degenerating the Mexican race during a time when the Revolution gave rise to a new nationalism.

There were several instances of attacks and robberies against Chinese immigrants motivated by anti-Chinese propaganda and prejudice, particularly in the northern states. These included anti-Chinese clubs, newspapers, comedies, cartoons and songs that were intended on segregating them from the rest of the Mexican community. Mass deportations took place across the country in the 1930s, with Chinese and Chinese-Mexicans forced to enter the United States or return to China. By 1940 the number of Chinese living in Mexico had dwindled to about 6,000.

In the years that followed, there were campaigns to return the Chinese to Mexico, as well as efforts to repatriate deported Mexican nationals. Small groups of Chinese were eventually allowed back into the country and continued with their day-to-day lives and businesses between the late 1930s to the 1960s.

Today it is estimated that there are over 70,000 people of Chinese descent living in Mexico.

Straddling the US-Mexican border between California and Baja California there are hundreds of Chinese restaurants that help tell the story of the historic arrival and hardships of Chinese immigrants in this country. It’s a story about perseverance and survival in spite of great adversity, violence and prejudice. With these successes, the Chinese have continued to contribute towards Mexico’s diversity and remain an important part of Mexico’s immigration history.

I wish I could have talked with some of them. I didn’t meet anyone besides the restaurant owner, and even then I didn’t engage in any conversation due to language barrier fears. Of the few Chinese that I saw at the time in Mexico City I could have sworn they were overseas tourists. They must have felt the same looking at me. I felt like an outsider because of how I looked, but interestingly, I’ve been asked “where do you come from?” more often in my home country than in Mexico.

My friend was rather nonchalant about the food as it’s practically fast food. Chinese food is not as “special” as Japanese food or Korean food in Mexico. For Mexicans, Chinese food is almost cheaper than eating Mexican. I crack open my after-dinner fortune cookie and find a note inside—no surprise it was in Spanish. The meal was nonetheless a unique dining experience that I couldn’t have anticipated, with still a sense of familiarity in the foods and restaurant furnishings and atmosphere. Albeit with a spicy aftertaste that lingered in my mouth.