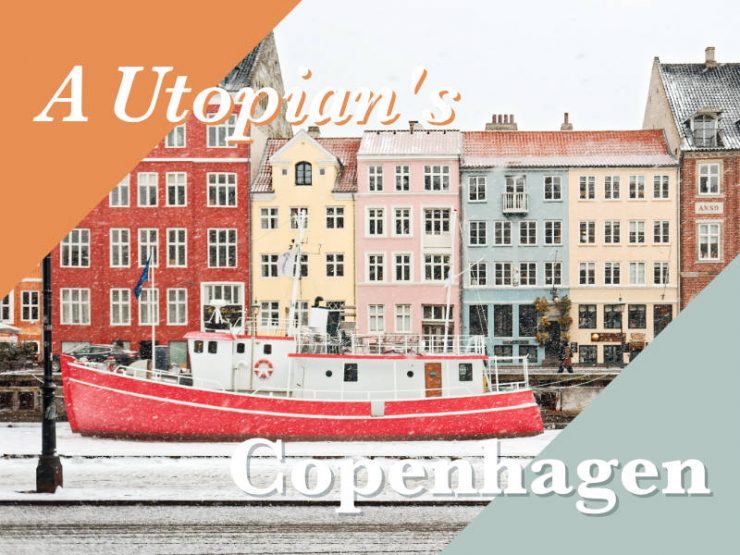 My perfect day in Copenhagen starts in Vesterbro, my favorite neighborhood in the city. Formerly a blue-collar neighborhood, it’s known for its hipsters, dive bars, and murals, so I feel right at home, thinking of the Mission District in San Francisco, my second home I left behind.

My morning begins with pastries. I lived in Paris for years, but I might go out on a limb and say that the Danes’ pastry and bread-making skills are on par if not slightly above the French in general. Near the end of Istegade is BRØD, where a sandy-haired young Viking stands behind the counter and gruffly hands over fresh-baked bread, steaming heft and wholesomeness in his likeness.

One of the things you must do to fully enjoy Copenhagen is rent a bike. The bike roads are so well-paved, the city so level, and the air so crisp, it’ll make you wonder what you did to deserve this bliss. Ride down the suspended bike-only bridge by Fisketorvet mall, and head to the docks for a canal tour, preferably one where they give you warm wine, or gløgg. (I swear I’m not choosing all of these words based on the funky-looking Danish “ø,” which is called a Faroese, you nerds.)

During the tour of the Copenhagen canals, you will learn many things about this watery city, like how it was founded in 1167, about the illustrious reign of King Christian IV, and their near-constant naval humiliations. But the most impressive of all is the newly built power plant, Amager Bakke, which imports waste from neighboring countries to generate energy. The smoke produced from the plant is 95 percent water, with which they aim to recreate the freshness of a mountaintop near the plant’s chimneys where the world’s largest man-made ski slope starts. If that is not doing the MOST good, I don’t know what is.

Back on land, it’ll be time for lunch. Torvehallerne is a fresh food market that delights the senses of food-obsessed world travelers and Copenhageners. Definitely have the smørrebrød, which is dark rye bread covered in all good things like smoked salmon, roast beef, or shrimp, smothered in aioli, nuts, and dill. After that you could check out the Design Museum, one of the best of its kind. But the mother of Danish design and supreme engenderer of material covetousness is Illums Bolighus downtown, the most spectacular design and living store I’ve been inside.

By the time I’ve had my fill of looking at pretty things it’ll be around 3 or 4pm, when people get off work. Yes, you heard me right. It’s time for a drink. A Danish friend told me Denmark has the highest per-capita consumption of coffee, ice cream, and beer. I didn’t check these facts, but I believe him because he’s a doctor.

Whatever you choose to drink, make sure to have a good view of the street to watch the commuting Danes. Other than the fact that they are ridiculously good-looking, one thing struck me as particularly notable: the amount of blond-haired children in the street accompanied not only by their beautiful mothers, but invariably by their fathers as well. Truly, I had never seen a city where so many men were catering to their children.

This is the first place I’ve ever been where having kids and taking care of them isn’t emasculating for men or akin to career suicide for women. It was almost as though toxic masculinity had been wiped out. Maternity and paternity leave is mandated by law, and not a miserly few weeks for the mother only, but a whole year, that’s fifty-two weeks of paid leave to be shared between the parents. The government takes good care of its citizens.

Coming from San Francisco and Seoul, where none of my career-driven girlfriends dare having children until they are settled and secure well into their mid-thirties, I suddenly had the creeping suspicion that the rest of the world had got it all wrong. The Danes had figured life out. Everyone was well-fed, a feeling of wholesome well-being permeated the city with the brisk salty air coming off the Baltic Sea. It’s where a lot of young people from all over Scandinavia, known for its well-being already, are moving to. After being in four Nordic countries and living in Copenhagen for three months, I would say it’s the most “happening” of all the capitals in the region.

This was the ideal socialist Utopia, or the closest thing I’d ever seen. The possible future of feminism and mankind invigorated me. But looking around, my heart sank. No one here looked like me. People of color were rare and far in between: I would never belong here. I would always be considered a tourist, or a worse, a Thai masseuse.

The Danes are kind but insular people who are sometimes described as cold by expats. Their days and weekends are filled with family picnics and parties that outsiders aren’t invited to. What they have, their culture, their practical sensibilities and husbandry of their surroundings, their dedication to the good life represented by hygge are treasures that should be protected.

But Copenhagen is where one of the worst housing crisis in Europe is taking place for students, newcomers, and immigrants. Denmark receives less refugees per capita than any other Western Europeans countries excepting the UK. It is a far cry from what Denmark’s neighbor, Sweden is doing. The future and health of a city can be judged based on their treatment of outsiders, people who aren’t from there who want to move there. And it struck me as sad that some nationalists might cite Denmark as a good example to close their borders to people in need.

When I am about to be depressed by my own thoughts, it’s time to head to Christiania. Christiania Freetown is the jewel of Copenhagen, a radical morsel of prime real estate that hippies took over in the 70s smack-dab in the middle of the city. Until quite recently they didn’t pay for electricity or taxes, operating under their own laws. Before sunset is the ideal time to go there to check out the culture and architecture, euphemisms for the only place that sells weed in the open in Denmark. Sit on the outdoor benches or by the water with a beer in hand and feel that brotherly love seep back into you.

When it becomes too cold to sit outside, I would head back towards Vesterbro to Kødbyens, the meat-packing district filled with restaurants and nightclubs, to continue the night until the sun comes up. As I creep back home in the morning, the streets are quiet and subdued, foggy and windy like no one lives in this sleepy town. There is none of that anxious energy that makes a big city spin, spin, spin. Bukowski’s saying, “Find what you love and let it kill you,” is not a phrase that goes down well with the practical Danes nor with the soporific comforts offered by hygge.

And I love Copenhagen because it helps me imagine a different life where I don’t have to kill myself for my career or tamp down every instinct until I make something out of myself. If only one could belong here.

(Written by Myles Ji. Myles is a literature freak and music geek whose debut novel is coming soon. You can follow the works of Myles on Medium, Twitter, and Instagram.)