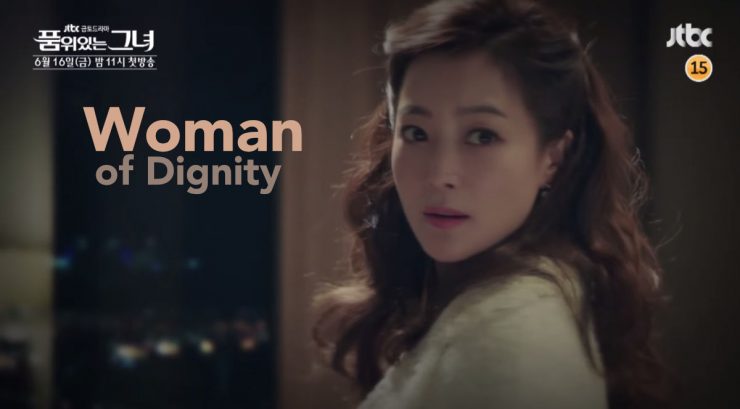 ‘Woman of Dignity’ (or ‘The Lady in Dignity’ depending on the translation) takes these themes for a fascinating whirl, blending comedy, drama, and mystery thriller. While the drama is quite underrated internationally, its compelling plotline and powerhouse female leads, Kim Hee Sun and Kim Sun Ah, made it the most-watched K-Drama on JTBC. I wrapped up 20 episodes on Netflix in just one week and it was one heck of a ride!

It delves into the lives of the upper-class ladies of Gangnam, including Woo Ah Jin (Kim Hee Sun), a woman known for her charm, elegance, and exquisite eye for art. Despite her high status, she shows genuine kindness and generosity towards people—traits that ironically lead her to a series of misfortunes. Her fate takes a drastic turn after she brings two women into their lives: Yoon Sung Hee (Lee Tae Im), a painter who begins an affair with her husband and Park Bok Ja, a live-in caregiver who turns out to have dark intentions.

The first episode takes a dark turn, revealing Park Bok Ja’s murder. It then flashes backs to what really transpired prior to this mysterious murder. The death of the drama’s major character took me by surprise (I mean come on, it’s just episode one!), but it also raised a lot of questions that got me hooked. It then outlines how Park Bok Ja’s opportunistic motives led her towards a life she coveted immensely.

No gender can justify adultery, but this drama will make you shake your head in disapproval with lines like, “You’re not a real man unless you have another woman besides your wife.” In many patriarchal countries such a mindset is nothing new. Meanwhile, women committing the same sinful act suffer harsher consequences.

The drama showed different facets of the struggles of the women caught up in the mess brought about by their filthy rich husbands—legal wives, adulterers, and mistresses alike. It covers a broad perspective that lets the viewer understand why these women did what they did. The drama also draws the hard truth about how a grandiose lifestyle sometimes serves as a ‘cover-up’ for a dysfunctional marriage.

Rich, powerful women are often portrayed negatively in Korean dramas. However, Woo Ah Jin’s strong character shows how a woman can stand her ground with dignity despite distressing circumstances. She knows how to protect what’s hers and how to let go of things that hold her back.

I think everyone can relate to these words. It’s crazy how people can go to great lengths just to get the things they want, whether that is fortune, fame or love. ‘Woman of Dignity’ is a unique drama that lets us understand what drives the characters, both the leads and antagonists, to their choices. It’s a wake-up call that money doesn’t always determine one’s happiness.