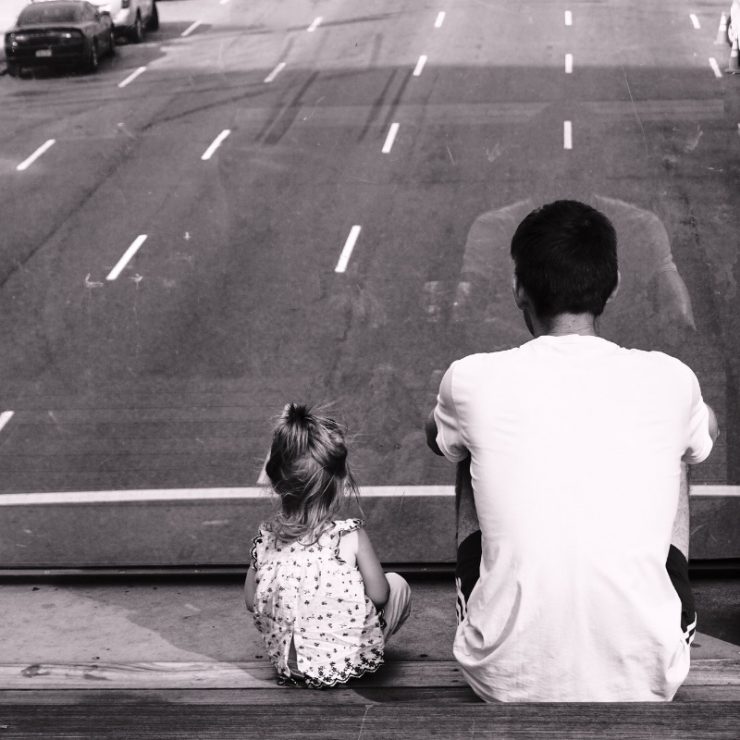 For a while it has been hard for me to say the “Our Father” prayer. A confirmed Catholic enamored of female saints and mystics, especially St. Joan of Arc, I used to say the prayer because it seemed to say it all. But, when I considered my earthly relationship with my own biological father, it was painful to connect with a male deity on an emotional level.

To be able to connect with the spiritual, I had to look back at the earthly life and consider what had driven me and my father apart. It meant that I had to see my father as a person, rather than through the lens of filial expectations of a nurturing paternal figure. What I had seen till then were fantasies and dreams of what a father should be, instead of a person who struggled with depression and frustration. In him, I could have felt only faults, blames, and memories of harsh words and exchanges, instead of the human being that he was.

A dream and a cry of my father

My notion of my dad started to change when he had a dream a couple of years ago.

My mom told me that one night he was bawling profusely in his sleep. She could tell he was having some type of night vision so she left him alone to finish this dream, whatever it might be. The next morning, she asked him about it. It is VERY unlike my dad to be emotional about anything, and even less like him to cry. His adult life was mostly consumed by stoicism, with the exception of anger and a temper like a lightning bolt.

So, what was his answer? He saw his mom in his dream.

My dad said, “no matter how old you are, when you see your own mother, you are a baby.”

In reality, my paternal grandmother passed around 1988, when I was 15 years old. Or, so we have been told. The situation around her death is unclear and shrouded in silence. Apparently she was suffering from some type of dementia. The story is that she wandered off and never came back.

The last time my dad saw her was back in 1974, before he moved to the United States for his first teaching job in Oklahoma. He was 34 years old back then and very excited at the opportunity. Little did he know the enormous stress that this journey would have upon his mental wellbeing, his sense of identity, and his social support networks. He could not have imagined back then that he would never see his mom or his mother country again.

When I was Daddy’s little girl

There is a photo of my father holding me as a toddler in my sleep. I felt safe. There is another picture of me on my first day of kindergarten. Clad in a yellow shirt and a red plaid skirt, holding a metal Mickey Mouse lunchbox, I was happy. My dad took that photo and walked me to school on my first day.

Fast forward about ten years, my father was not teaching any more. He was frustrated, isolated, and deeply ashamed. Yelling was his main mode of communicating with us. For a long time, I could not stand the sound of the Korean language because it became a conditioned stimulus, associated with rage and disparaging comments, and my conditioned response was terror and anxiety, manifested as a huge knot in the deepest pit of my stomach. This led to even more illness, both mental and physical. My father never hit or struck his children, but his words were harsh blows.

Pain leading to compassion and a calling

Today, at mid-life, my calling is in mental wellness and psychology. I have studied prenatal, birth, and attachment psychology with Elsa Asher and Chanti Smith at the Prenatal, Birth, and Attachment Clinic in Berkeley, California.

Through the 1940s and 50s the eminent psychologist John Bowlby studied children who were separated from their parents during World War II in London. These children included Jewish children who were brought to England by the Kindertransport so that they could be kept safe. Bowlby found that separation, the opposite of attachment, led to anxiety and sometimes delinquent behaviors. In other words, the children did not feel safe or secure and were forced to fend for themselves.

His work was continued by Mary Ainsworth, a developmental psychologist who designed the “Strange Situation” experiments. In a research lab setting, a mother and child play with another adult, a confederate in the research. The mother leaves for a moment, as scripted, and then she returns. The behavior at the reunion is the salient point, and Ainsworth determined that there were three categories of attachment.

The first one is ‘secure attachment.’ A child is distressed when the mother leaves and happy when she returns. The mom is like a “safe base,” and the child can freely roam and explore and learn about the environment. When Harry Styles was a new star on the X Factor in 2010, he visited his home before the final. We saw his mom says to her then 16-year-old son, “…always my baby, no matter how big and famous you become, you will always be my baby … and I love you very much.” That’s an example.

The other two categories are insecure. The first is ‘anxious-avoidant,’ when the child exhibits little or no emotion either when the mother is there or when she out. The apparent lack of affect may be a mask for distress that is not shown for fear of not being comforted. The second is ‘anxious-resistant,’ where the child is clingy and anxious, needy for the mother. This second type is like someone who needs constant reassurance that their partner is committed to them.

You can imagine how much of our relationship conundrums can be explained by these categories.

From theory to practice

My infant self was born into a well-established family and secure web of support. This lasted about two years. My sense of safety in this world was compromised when my dad moved us to the United States. My toddler self cried at the new faces and missed her extended family, especially her aunts and cousins. In my mind’s eye, I can still picture them all, and I also see the new faces that were not very friendly to us.

But what do I see when I look through my dad’s eyes? It is a far more desperate and distressed composition and landscape that comes into focus. When I first started writing this article back in June, my intent was to talk about father and daughter bonds and to confess my insecure attachment to my dad. As with most writing, the article had her own life, and she changed. This article is not about me. It is about my dad and his detachment, literally, from his mom.

These days, it seems that she is calling him home. At 78 years old, my dad is losing his memory. In a spiritual sense, it seems that he is preparing to go home, after years of being abroad. My dad is choosing to forget, at least on some level, and he is setting me free from the hurts and anguish of most of my later childhood and early adulthood. He kicked me out of my childhood home once, and now, in a gentler way, more like the way he would have liked to have been if circumstances had been different, he is letting me go.

In a way, he did give me a secure attachment, and I have a secure base in my childhood to give my adult self a voice in this world. I am able to love. In mid-life, I still take care of him and my mom to an extent. They live close to me and my family, and we see each other often. As he feels the need to adhere to a schedule so that he knows what day it is, I see him now for who is, not just as my dad but a fellow traveler in life. My brother admitted that maybe our dad will not be with us much longer.

In a few years, he could be in heaven, and maybe then the “Our Father” prayer will have much different significance. Until then, we are healing the words, letting go of memories that only wound. Sometimes I show up in a scarf with the same pattern of the skirt that I wore on the day that my dad walked me to kindergarten. He might not remember, but I do. I felt safe, secure, and happy that day.