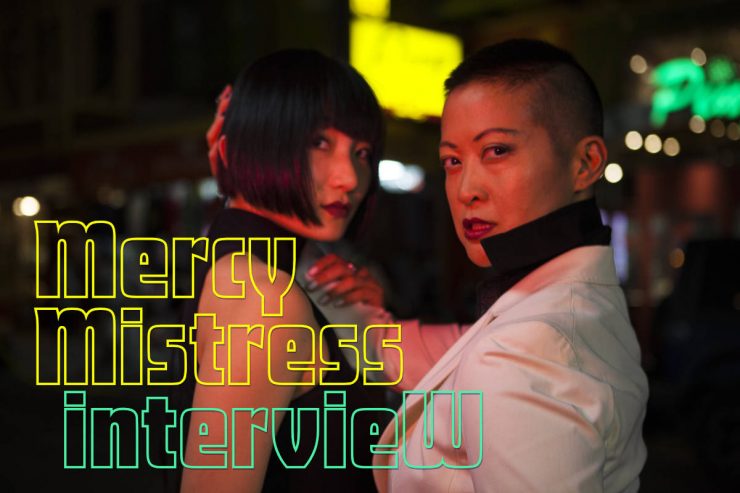 Hi Yin and Poppy! First of all, congratulations on Mercy Mistress. You two are the power duo of this web series. I wanted to ask what’s it like working with each other?

Yin: Working with Poppy has been an incredible life experience. We share a great deal of core values: activism, integrity to our community, and stories. But we are also very different in our general personalities. Poppy is vivacious—true to her chosen name. I tend to have a more reserved and darker modality, so we balance one another in the production work.

Poppy: Yin is like family to me and we care about each other very much. I think loving the people you work with is very important in storytelling, especially when it is as intimate a story as this. There is a lot of trust you have to have in one another. Trust that people will have your back and that people will see you the way that you wish to be seen.

Could you briefly tell us how this project started and what was the casting process like?﻿

How much of yourselves is in Mistress Yin?

Yin: Mistress Yin is fictionalized and updated to be a millenial. I’d say that she is about 60% true to me, but that ratio may change as the story progresses.

Poppy: I saw some obvious overlaps as a queer Chinese American child of immigrants living in the States. I definitely felt able to access certain parts of myself which I don’t always get to do while playing a role. I hope that stories like this can be one of many building blocks to create a cultural space where we can exist.

It’s honestly delightful to see that MM is a women-dominated team. How was that experience?

Yin: It’s been an incredible journey to work with these talented and passionate women. There is such care in the communication and a real respect that transfers to how I am able to handle the more stressful situations in production. In fact, I feel that the female gaze created an overall sensual story rather than relying on sexual imagery as rote sensationalism.

Ah, and recently Margaret Cho teamed up with you as one of your new executive producers?

Poppy: Yes! Teaming up with Margaret has been a dream come true. When we were thinking about our dream executive producers, Margaret’s name was at the top of that list. She is one of the few visible queer Asian American women in media and it is her work that has paved the way for stories like this to happen.

Yin: Queer, Asian American, sex positive, feminist who tackles the topic of trauma with hilarity … This is the perfect collaboration. I’m both humbled and ecstatic.

Everyone’s elated upon your announcement of joining MM. Did you know Yin and Poppy before you joined?

Margaret Cho: I really fell for the project at first sight. I hadn’t met Yin and Poppy before, but I felt like I already knew them through our shared experience of Asian American queer freakiness! They had such a fresh perspective and were telling stories I related to so deeply—we must have collaborated in another life! It all feels so easy and familiar.

Mercy Mistress without a doubt involves a lot of important themes for which you’ve been a strong advocate since forever. As a representative of Asian Americans, what’s the relevance of this story in Hollywood?

Margaret Cho: It puts the power in the hands of Asian American women—and that’s what makes it so personal and thrilling for me. We’ve been objectified so much for so long—often our role is to be some kind of fantasy figure and not real. Mercy Mistress speaks to the realness. I love the realness. I hope people will get excited about breaking new ground—and find it as moving and sexy as I do!

To wrap this up, what would you like to impart to your audience after this passion project?

Poppy: This is the heart of what looking at identity with an intersectional lens means. I hope that when Asian women see this series—whether they are kinky or not—they see a protagonist on screen who is empowered in her own sexuality and who owns her own body. Someone who contradicts and subverts the stereotypes because we are so much more.

Connect with @MercyMistress on Facebook and Instagram. Margaret Cho will present Mercy Mistress at Museum of Sex on January 7th, Monday at 730pm. Click here for more information.