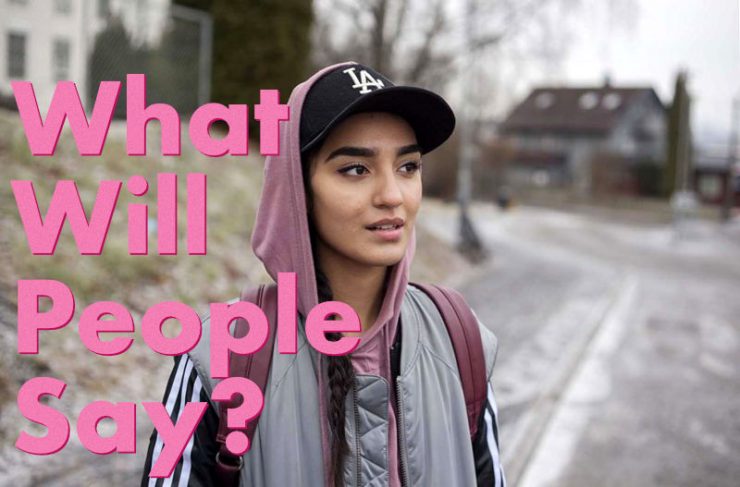 What Will People Say (Hva Vi Folk Si) is a terrifying film based on and inspired by the horror of the life of Iram Haq, its director. The film follows main character Nisha (Maria Mozhdah), a 16-year-old Pakistani-Norwegian, through her dual existence in Norway. A culture clash divides her strictly conservative Muslim family from the more liberal European lifestyle of her country. The premise isn’t that complicated, but Haq had different plans.

She breaks the walls of Nisha’s home, from Norway to Islamabad and for the next hour and forty-minutes I felt powerless, desperately waiting for some catharsis from the narrative, but it always fell back into her living nightmare of family, community, and culture. As cruel as it sounds, I kept waiting for the protagonist’s death.

The film unfolded in three acts. In the introduction we are presented with the best Pakistani daughter possible at home; doing household chores, obeying her parents’ demands, covered up with little to no skin visible. In another scene she’s a normal Norwegian teenager outside her home; wearing crop tops and tight jeans, partying, sneaking off with friends, drinking and smoking. Within the first few minutes we appreciate the disparity. And, like most of us, Nisha does her best to balance both worlds and roles. Until she is caught by her father Mirza (Adil Hussain) cuddling with her Norwegian boyfriend Daniel. Then her world is ruined and all it took was one simple mistake.

Her parents insist and believe that she has slept with him (she hasn’t), which apparently stained their honor. They say her behavior is beyond. The shame and guilt Nisha harbors escalates quickly as the film progresses. “Did it ever occur to you what effect your actions would have on the rest of us?” Mirza pronounces after repeatedly yelling in his daughter’s face, “Shut your mouth!” To reclaim the family’s dignity father Mirza and brother Asif kidnap her, forcibly taking her to their aunt’s home in Islamabad.

The second act takes place in Pakistan, where Nisha goes through the worst of experiences. It was painful to watch this teenage girl passed around, bartered like a bundle of goods by her family. The dark, narrow streets she tries to escape, only to be trapped by catcalling men, the strict house rules forbidding her from using a mobile phone or a computer. Her auntie beating and locking her up. Her uncle burning her passport and threatening her. All the verbal, physical, emotional and mental abuse she undergoes are mind-numbing.

But Haq wasn’t done telling the tale of a woman’s suffering at the hands of a patriarchal system and a misogynistic society. Nisha is caught kissing a second time, this time with her cousin Amir in an alleyway. The encounter with the police is torture. I watched Nisha forced to take off her clothes, Amir forced to touch her, all while these policemen take photos and videos of the two naked youths, battered and frightening for their lives. I felt helpless, defenseless. Like how one would react to being sexually harassed, assaulted, abused.

Finally, in the third act Mirza returns to get his “shameless girl.” This time we see a powerful scene between father and daughter. After spitting on her, saying he’d kill her, they drive off to an isolated cliff where he orders her to jump. To just end it. The film makes its audience feel as if death is the only logical ending. Cut to Nisha’s return to Norway where a marriage has been arranged to a family’s friend.

“We can’t show our faces to anyone anymore. After this wedding, everyone will stop talking,” her mother murmurs.

In the end, we see Nisha breakout for the last time and run from the horrors of her home while her father watches her disappear. Though there is warmth in the relationship, shown in small glances that carry more weight than words, it is hard to sympathize with Mirza and the rest of the family. The huge gap between beliefs and culture was strong enough to break them.

It is through casual conversations and brutal reactions that Haq lays out the complex issues women must navigate in their daily life, particularly in the Pakistani Muslim community. The lines are filled with oppression, hypocrisy, distrust. It doesn’t help the face of Islamic culture, but this is some, if not most, women’s reality. Unequal rights between genders. No free will. The torment and torture women experience. Haq and Nisha is one of the million #MeToo, #TimesUp, #ChildNotBride, #DomesticViolence voices.

If it takes the straight-forward dread of this film to portray the nightmare of being a young woman in a patriarchal culture, then so be it. This is not to attack the Islamic community per se, we already know it is diverse, but to sandblast outdated institutions and practices. And this is more relevant and necessary than ever.

Nisha is “a shameless girl” because she doesn’t follow the unjust rules of the bigger group and  challenges the idea of what a perfect Muslim girl should be like. A perfect encapsulation that simply recognises how society, culture and people still try to make us women inferior.

At the end of the day, do not underestimate your peers or anyone else’s support for your struggles. You are not alone. Value your own individuality and opinions—not everything is about your background or your roots. This is why our fight and movements are significant. This is why this film exists. This is why I write this. For all of us out there to create a safer space for one another and continue making our own choices—they are as powerful as everyone else’s.