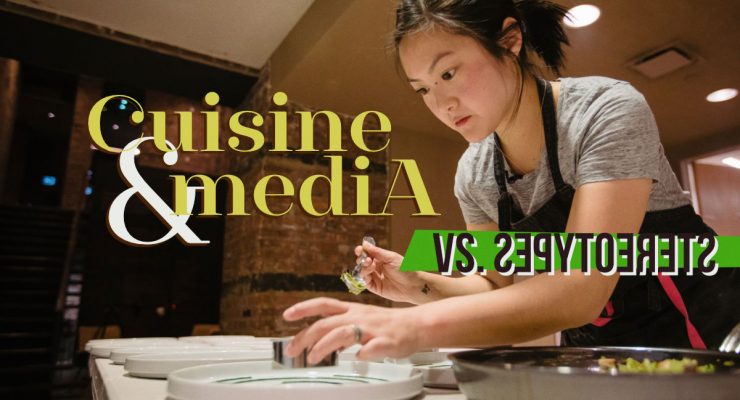 An interview with Jenny Dorsey, the creator of Asian in America: a six course dining experience and exhibition that discusses Asian American identity through food and drink, virtual reality, and poetry, and founder of Studio ATAO.

Growing up Chinese American is hardly a unique experience, but for Jenny Dorsey, founder and chef of Studio ATAO, it served as a source of inspiration for her current exhibition and culinary presentation Asian In America. A New York-based professional chef, writer, and artist, Dorsey uses immersive dining formats and multiplatform storytelling, including virtual reality, visual art, poetry, and dance, to present experiences that encourage conversation and social discussion about issues of race, gender, history, and culture.

In early 2018 Dorsey came up with the idea to integrate a plated dinner event with a discussion about the Asian American experience. The result was Asian in America: a six course dining experience and exhibition that discusses Asian American identity through food and drink, virtual reality, and poetry. Each course highlights the meaning behind the choice of ingredients, preparation, and presentation. The exhibition lets diners meditate on their own upbringing and heritage, and creates a safe haven for them to have a conversation and bond over shared experiences.

As a first-generation Asian American who cares about how that demographic is perceived, Dorsey understands the importance of making an effort to break out of the uni-dimensional stereotype into which American society reflexively boxes minorities. “Society limits the personalities minorities are ‘allowed’ to have,” she once observed in an article on Medium, “I struggled with being what felt like the perpetual bystander having no control over how my culture or identity was interpreted. It was not up to me to decide what was ‘right’ or ‘acceptable,’ only to accept the verdict and its consequences.”

Feelings of helplessness, self-consciousness, and shame have a significant effect on minority experiences. These feelings of vulnerability have an insidious way of keeping people locked into a role, often on a subconscious level. It is this deeper psychology that Dorsey works to tap into in her exhibitions because it hits at something everyone can relate to. “Being vulnerable is the crux of who we are as humans,” she explains, “It’s so important to be willing to assess yourself with all the scars that you have and still be able to say, ‘I am proud of who I am, even though I may not be proud of all the decisions I’ve made.’”

For Dorsey, food is an excellent starting point for these deep cultural discussions; especially fine dining, which traditionally focuses on the beauty of the food with only a dash of back-story about the origins of the recipe. What she strives for is to move the food industry, and the conversation, toward something a lot deeper: to guide her audience to a place where they can feel safe enough to see themselves objectively and openly. In Dorsey’s words, “Most people don’t want to see every aspect of themselves, and that skews their vision of the world and leads to stereotyping.”

Dorsey has big plans for future projects. Her next exhibition, HIDDEN, is a virtual reality food and dance piece that explores cognitive dissonance and how people often see the world differently from how the world actually is. It is an organic continuation of her interest in the barriers people raise, barriers that ultimately impact how they live and interact with other people. She is also in the early stages of organizing a project exploring female pain and how the history of the world has been built on that pain, particularly the societal phenomenon of women being expected to desire or gloss over things like the biological pain associated with fertility and childbirth, or the self-imposed culturally based pain of fashions like foot binding and stiletto heels.But in the meantime, Asian in America continues as the flagship series for her studio and is slated to tour various museums and galleries in 2019. Dorsey hopes that her work can help the Asian American community and other minorities come together and see themselves in a different light, and also give her diners the ability to vocalize their own stories, growing an understanding that continues beyond the dessert course.

This article was written by Whitney Vendt for Studio ATAO, a nonprofit culinary production studio empowering artists to build one-of-a-kind live experiences. Whitney Vendt is a journalist and author in Los Angeles. She has been a staff writer for CSQ since 2013. Previously she wrote for the Annenberg Digital News and served as the fiction editor for the Southern California Review. Whitney has a Master of Professional Writing degree from USC and a degree in English from Kenyon College. She has worked on various National Geographic Channel shows, and has several short screenplays that have toured the national festival circuit. She is currently working on a novel for young adults.