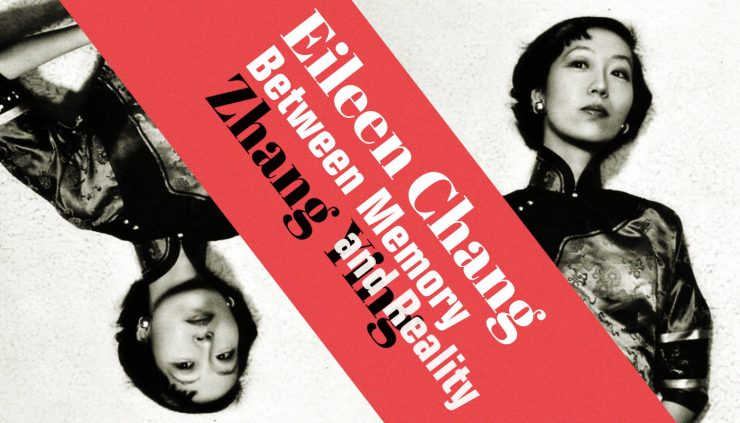 Eileen herself has been quoted as saying that “Between memory and reality there are awkward discrepancies.” This might well apply to the reality of her own life as a Shanghainese woman who wrote feminist works about romance and humanity in the face of war and upheaval. She is now obscured from our memory by time and even the click-clack of her own typewriter.

In her time Eileen was considered one of the very best of writers; listed as one of China’s four women geniuses (the others were Lu Bicheng, Xiao Hong, and Shi Pingmei), and “had it not been for political divide between the Nationalist and Communist Chinese, Chang almost certainly would’ve won a Nobel prize,” according to USC professor Dominic Cheung.

Born Zhang Ying on September 30, 1920, to a wealthy family, she was the paternal grand-daughter of Qing Dynasty government official Zhang Peilu. She grew up during Shanghai’s golden age, when it was a metropolis of international affairs and splendor. A city full of socialites and beggars, artists and revolutionaries, gangs and brothel workers.There were skyscrapers and art deco facades, local street vendors and Russian bakeries, temples and gardens, cars and rickshaws, quaint cafes and nightclubs. Fashion was all the rage and women wore qipaos with high slits at the hem, linen trousers, or Western-style blouses and dresses. A city where you heard many languages: the Wu Dialect (a Shanghainese dialect), Mandarin, Cantonese, Russian, American English, and British English.

Although she lived in this fabulous city, nicknamed the “Paris of the East,” her parents’ difficult relationship made for a troubled childhood. Her opium-addicted father often cheated on his wife and brought home sex workers and concubines, which usually led to fights.

Ying’s mother was bound-footed and she valued modern education as a way to give her daughter a better life. She saw to it that Ying was raised with private tutors for English, piano, and painting, and later enrolled her in the prestigious Christian school, St. Mary’s Hall, as an English literature major. When Ying entered English school she was renamed by her mother as “Ailing,” a transliteration of her new English name of “Eileen.” In high school, now as Eileen, she studied the classic work “Dream of the Red Chamber” by Cao Xueqin, which influenced her later works.

While Eileen was in high school, her parents divorced and her mother moved out, forcing Eileen to live with a stepmother. After her graduation in 1937 Eileen and her stepmother had an argument, and as punishment her father locked up his daughter in her room for six months, refusing to release her even when she contracted dysentery and required treatment. Shortly after her eighteenth birthday she escaped and went to live with her mother.

That same year, 1938, saw the fall of her home city. With the invasion of Manchuria and the Marco Polo Bridge Incident, the Imperialist Japan Army launched a full-scale invasion of China, starting with Shanghai. The city’s history was scarred by the Battle of Shanghai, left with haunting memories and photographs of bombs, ruins, blood, fear, and death.

Eileen and her mother fled to Hong Kong, a British trading post at the time, for safety. There she attended the University of Hong Kong where she met her lifelong friend Fatima Mohideen. In 1939 Eileen was accepted to the University of London on a full scholarship, however due to the Second Sino-Japanese War, she was unable to attend.

In December 1941, when she was only one semester short of earning her degree at the University of Hong Kong, that city too fell under Japanese imperial occupation. The dreaded period of Hong Kong history became known as the “Three Years and Eight Months.” During the years when the island colony switched hands from the British to the Japanese thousands of civilians were killed by the occupying forces. Despite living in fear and suffering food shortages in Japanese-occupied Hong Kong, Eileen’s writing career flourished as her sojourn in Hong Kong made her look back on her Shanghai home from a distance.

She would return to Shanghai in 1942, where her short stories and essays made her a celebrity. There, in 1943, she published some of her most acclaimed works, such as “Love In a Fallen City” and “The Golden Cangue.” She was exalted and popular in her early career until war and the Communist takeover in 1949 made it difficult to pursue her writing career.

Leaving Shanghai once more, she found work as a translator in Hong Kong for the United States Information Service, wrote her first novel entirely in English, “The Rice Sprout Song,” and translated a variety of English books into Chinese (most notably “The Old Man and the Sea” and “The Legend of Sleepy Hollow” by Ernest Hemingway). She left for the United States in 1955 and never again returned to mainland China ever. She became a US citizen in 1960 and briefly visited Taiwan looking for more opportunities before returning permanently to the USA in 1962.

Unfortunately her success and fame in writing novels and poetry contrasted sharply with her real life romances and marriages. She first married in 1944, financially supporting her husband, the writer Hu Lancheng. That liaison only lasted two years, as her husband was both a notorious adulterer and denounced as a traitor for his work as a propaganda official of the Wang Jingwei regime, the Japanese imperial puppet state centred on Nanking and Shanghai. Divorce followed in 1946. Later, in New Hampshire, she met and became involved with the Philadelphian screenwriter Ferdinand Reyher. She became pregnant with his child and he proposed to her, but did not want the child. Chang had an abortion and they married in 1956, but soon after Reyher suffered a series of strokes which paralyzed him, and he eventually died in 1967.

Eileen lived out her life in the United States doing various work such as finishing her semi-autobiographical novels “Fall of the Pagoda” and “The Book of Change” in 1963, and in 1969 working as a professor and researcher at UC Berkeley. In 1972, she moved to Los Angeles where she translated “The Sing-song Girls of Shanghai” by Han Bangqing, which was published after her death.

In her final days she grew increasingly reclusive and on September 8, 1995 she was found dead by her landlord in her apartment on Rochester Avenue in Westwood, Los Angeles. In accord with her will, she was cremated without any memorial service and her ashes were scattered to the Pacific Ocean.

Her writing has left a legacy in Chinese literature to inspire future generations. One of the novellas she published in her lifetime, “Lust, Caution,” was adapted into an award-winning film directed by Ang Lee. Eileen was a romantic writer, a woman with a flair for fashion, and Shanghainese. Although on the surface she appeared glamorous, her reality was riddled with hardships and instability beyond her control. Through it all she wouldn’t stop writing what she wanted of her views and her dreams. It is perhaps fitting to remember a quote attributed to her, “Life is an extravagant gown, riddled with lice.”

This article was written by Emily Mun. She is an actor and writer born and raised in New York City. She is best known for her film work with Refinery29. She also does articles, creative writing, playwriting, and screenplays. She has been published by online platforms such as Here You Are, HelloGiggles, and April Magazine. Her monologue “Anna May Wong: PERSONA” was published in the book “In Full Color: The First Five Years Anthology.”