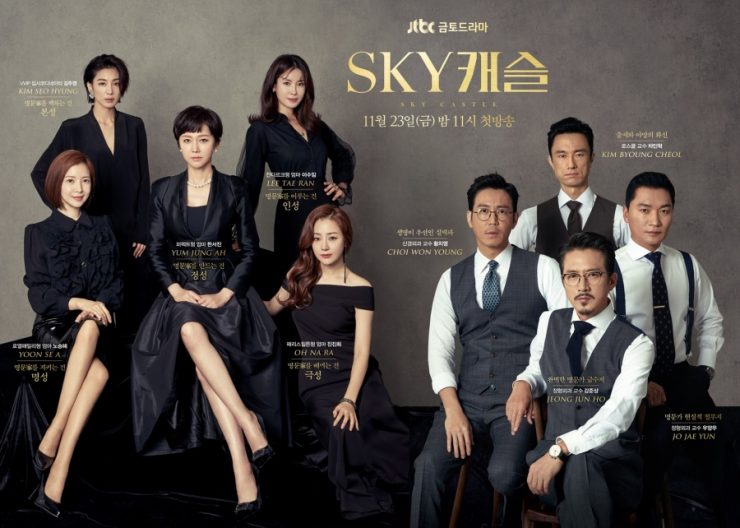 If you are K-Drama fan living outside of South Korea, you may have heard about SKY Castle, especially now that it’s available on Netflix. JTBC’s SKY Castle broke records in South Korea for being the first drama on cable channel with the highest viewership ratings. I have read about SKY Castle’s momentous ratings and they are indeed impressive, but I only decided to watch it when it’s about to end – after a number of my Korean friends and colleagues strongly recommended that I see it. I’m extremely glad I did. It’s a whole new level of pyscho with a very heart-wrenching plot. While this review is a bit long overdue, I still think the lessons it teaches are always very relevant to many individuals.

SKY Castle is a satirical, black comedy drama about four wealthy families with grandly notable educational and career backgrounds. With the patriarchs being successful doctors and lawyers, the mothers put all their best efforts for their children to get into the most prestigious universities in Korea in order to follow the footsteps of their fathers. The ultimate goal is to get their children to Seoul National University – whatever it takes.

I worked as a teacher in a private Korean academy for several years and this made me realize Korea’s highly competitive education system. One student attending three or more different classes in various academies after school was a shock for me. High school students are required to be in school until 10 o’clock in the evening and get extra classes on weekends just to ensure that they get very high scores (if not perfect) in the college entrance exams (수능). This academic setup is normal for South Koreans and this is why SKY Castle is 100% relatable to them. Han Seo Jin (Yum Jung Ah), one of the wealthy moms in the drama, obsesses over getting her daughter Ye Suh (Kim Hye Yoon) into SNU Med School. Failing is never an option so she hires an elite tutor to fully ensure Ye Suh’s admission at all costs.

According to the South Korean Health and Welfare Ministry, an estimated 90% of South Koreans who committed suicide in 2016 are caused by extremely stressful conditions. With the country’s intense competitive nature on education, students, especially those in third year high school, experience great stress daily.

The first episode begins with the Park family celebrating the admission of their only son to SNU Medical School but ends with a tragic suicide. This alludes how the rising suicide rate in Korea is mostly correlated to academic pressure.

Controlling the lives of their children disguised as parental love

“Was that really the right thing to do?”

I have asked this myself a lot whenever one character would do something so outrageous for the sake of her children. True enough, many of the characters in SKY Castle are twisted. However, the circumstances that surround them would really make you think if what they do is actually necessary to push their children to success. This subtle confusion perfectly describes how some of the parents in the drama think that their controlling attitude and blazing ambition for their children to succeed is a form of love. In the drama, you’ll hear lines like “This is for my daughter/son” countless times but in the end, it’ll show how it truly affects the child’s mental, physical and emotional state.

The phasing of the story is excellent and the character development of the families will make you shed tears. However, SKY Castle may not be everyone’s cup of tea. I have read some reviews from international viewers saying that the plot is mundane and the obsession of the elite families for academic success is senseless. It’s quite understandable considering that not all families share the same mindset as the parents in the drama. For me, as someone who worked years teaching Korean students, I have seen their struggles against academic pressure and SKY Castle perfectly embodies that. Of course, the drama had to exaggerate to make it more entertaining, but the core of the plot really hits home.

You can stream SKY Castle on Viu and Netflix.